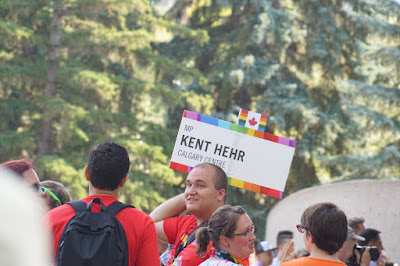 This is the letter I have submitted to the Gay Straight Alliance consultations by the Rocky Mountain Civil Liberties Association on Bill 10.

There are three core facts to be acted on for our province when examining Bill 202 and Bill 10.

Firstly, the evidence in support of Gay Straight Alliances is overwhelming. Permitting Gay Straight Alliances in schools where and when students want them demonstrably reduce the rates of suicide. So much so that rates for suicide ideation collapse by half for heterosexual males. When we reduce bullying for one population its knock-on effects can be seen for the greater whole.[1] We all benefit when we value human life and accept other people in a pluralistic society.

If we live in a society where we value human life we must take a clear stance and support these students just as they come into adulthood. It’s here where many are the most fragile in their identities and must be supported.


Secondly, there is a fundamental freeze in the behaviour of those who ought to be looking after our students in our schools. With the introduction of Sec.11.1 in the Human Rights Act by Bill 44 we as a province introduced a measure that would have teachers brought up to the Human Rights Commission if they didn’t give proper notice of LGBTQ discussions in the classroom.

That causes people to second guess themselves. It undermines the ability of professionals to engage in discussions in the classroom. And it is a ferociously isolating piece of legislation that says to every LGTBQ teen that they shall not be discussed and that something is wrong with them – not something that is wrong with how we treat them. It’s a viciously destructive act that is allowed to continue less out of an instinct to do harm than a political manoeuvre to steer clear of a potentially politically damaging scenario.

We have created barriers and frozen conversations that have long been resolved by society. Decades ago marriage equality was opposed by the majority of Albertans: now it’s an accepted norm and we are moving towards a more LGBTQ-positive world. The world is changing and we ought to be leading as a province and as a society.

This comes to my third and final point: we have a duty to protect our youth. We have to engage in the protection of all people and ensuring that their very human rights are protected. We live in a society with the Charter of Human Rights and a Constitution that enshrines these basic and fundamental protections and form the core of our laws. We have the freedom of association, freedom of assembly, freedom of conscience, to speak to our issues, to be protected from harm, and to live freely in a society.

In order to safeguard these basic protections of our civil liberties and human rights Gay Straight Alliances must be permitted wherever and whenever a student wishes to see them, s.11.1 must be repealed, and we must finally look to a future where we protect the rights of all.