That one time Justin Trudeau read my blog... 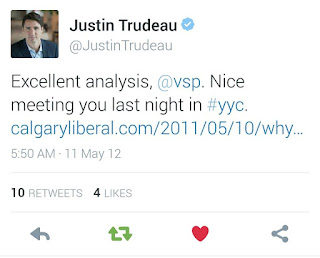 Here is the post below that I wrote in response to some of the criticism I received on another blog post after the 2011 election. That initial post was on the building of political organizations and where to direct investments.


This blog post by @vsp nails it: http://t.co/Rt7G5eKm Like it or not, centrism isn't a winning strategy in the current state of #cdnpoli
— Susan Delacourt (@SusanDelacourt) May 11, 2012

Delacourt (the journalist in the above noted tweet) also wrote an article in the Toronto Star, calling my scribbles as "one of the most intriguing posts about the Liberals’ future." You can read her thoughts here.

Over the last week I have gotten a lot of rather angry emails and notes speaking in opposition to my thoughts written about in my blog post last week on the Liberal Party of Canada. It has to do with the issue of centrism in Canadian politics and I do not believe I have been that clear on the subject.

First of all I would like to note that there is a clear demarcation between my opinion on a party's electoral strategy and what is required to build up the party. Particularly being a centrist party, "at the center of Canadian politics" as some politicians like to say, is a good thing because (a) that's where most Canadians are and (b) it's where most of the voters are.

Most Canadians don't particularly care for ideologies or any -ism so being where most of Canadians are is a pretty good thing. I think being centrist is wonderful and is the commonsense approach to politics. This is good and shouldn't change--it's where the voters are and where every party to trying to pick up votes. It's the basis of the Liberal Party of Canada kicking butt in the next election. The crux of my issue in my previous post is that being at the center does harm the party organization for elections.

While being where most voters are is a great thing an issue comes up when you're trying to get this center-vote to turn into volunteers, donors, campaign managers, or candidates.

It's the basics of party organization here is at issue. Seeing that by definition center voters are moderate and, well, non-radicalized you can't find people that will sit at the phones for four hours a day for 365 days of the year. That type and that level of enthusiasm doesn't exist for a majority moderate voters. As a "radical" centrist I have a similar level of dedication but I know there aren't that many of us, although I do know a few exist in Calgary.

One of the problems of having moderate folks our target market is that these folks don't turn into volunteers or candidates that easily. And this hurts the Liberal Party's "iceberg" has a systemic problem of not being able to tap into that large group of voters and possible supporters. By virtue of their policy, history, and other things, the way that the NDP reaches out to those center voters is through having a radical base--of social democrats, socialists, marxists, some unionists, malcontents, and generally angry anti-system people--and have these people creating the strength of their party to contact voters, become volunteers, donate money, and become candidates. The Conservatives do the same with different groups of people who have axes to grind with regards to government. The backbone--the base--of a party for these two parties is present and is clear, and arguably quite healthy.

The Liberals don't have the same thing.

So when I wrote about centrism not being a philosophy that will help the Liberals it isn't that I want to say that centrism is a dead philosophy but rather centrism doesn't build parties. We Liberals have to rely on other things to build up the framework required to push our party forward in gaining the minutiae of party organization.

My solution, as I highlighted in my previous post, was to grow/steal/find groups that do have an axe to grind with government and society... and bring them into the party. This is beyond pandering, beyond electoral gambits, and beyond policy. Brian Rice at processingpolitics.ca hits this nail on the head: it isn't policy or top-down leadership that'll pull Liberals out of this, but you and me getting involved.

My meek addition to his thinking is that it shouldn't only be traditional Liberals getting their hands dirty but pulling in groups to form the spine of the party. So in conclusion we as a party needs to adjust for the reality that the party's iceberg needs to grow/improve.

In my next post I'll identify some growth areas for us and where I have already seen some growth since May 2nd.