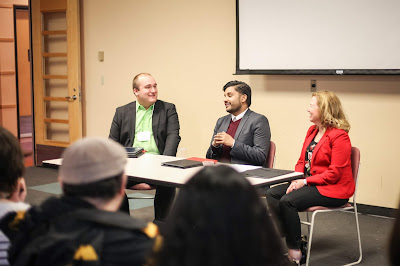 
Earlier this year I had the pleasure of speaking at the University of Calgary Alumni Association's Alumni Mentorship Conference. The Faculty of Arts Student Association and the Alumni Association brought in speakers from a wide array of industries - including government. I myself joined the nonprofits and government panel with Joy Bowen-Eyre (former chair of the Calgary Board of Education and is the Executive Director of the Alex Community Health Centre) and Rahul Pallan (who served with the Organization for Economic Cooperation and Development in multiple roles and is currently helping out the university's Vice Provost International).

I really enjoy these panels - but oftentimes, I'm either organizing them or preparing someone else to be on them. It's fun, and playing that role is rewarding, but being on a panel, well...

It was a rare pleasure and a real change in pace.

Tablet in hand, I was able to share with the crowd my experience. I went through how I landed my first job in industry, my ten years of a political career (campaign manager, senior bottlewasher, regional desk to two cabinet ministers, and working with Kent Hehr) and the work I've done since.

Taking my notes from the panel, and spending some time germinating on the subject, I also thought - this would make a great blog post.

So let me share with you some of the lessons I've learned about mentors and mentorship.

On the panel I lead off strong saying that a life of public service is fulfilling. It is values driven and an incredible career path. And, while it can be tough at times, you're working with people who are often as driven and as interested in meaningful change in our society as you are.

As it was a student-focused panel I went into relevant examples of my seeking mentors and asking for help that they could relate to.

My first example was knocking on a professor’s door. Or, specifically, sending him an email. It was to take his class on political campaigning. I wrote a simple, short email four months before the course even started, and then my effort began in earnest.

On seeing the course in the course listings I knew I had to take it. When I saw who was teaching it both raised my interest and determination (he had been a key member of Prime Minister Harper's campaign team, wrote books on politics, and had been teaching this campaigning course for years -- it was a real opportunity to learn from a true expert). I had initially asked the registrar on accessing the course, was then referred to the departmental office, who ultimately said that to wave the requirements I had to get the permission of the professor. I needed to have had multiple pre-requisites in several areas of the social sciences. This effort took hours - and three trips to his office to find eventually him there.

I had never taken a political science course before. I was first year student just exiting a term where I had failed out of engineering.

And I asked and he was convinced. He allowed me in his 400-level course, mostly reserved for my upperclassmen and graduate students. I still consult those notes I took in his class to this day - and applied the lessons he taught to each of the campaigns and nonprofits I've been involved with. Every step of the way - on advocacy, politics, and more, he has had an impact on my entire life.

It was also one of those rare courses where every student showed up at each lecture and were passionate about the subject. I still keep correspondence and go out for beers with the other students from that class. It gave me a network, a place to learn, and build to what's next.

Now, would he consider himself my mentor?

But he exhibited multiple aspects of a good mentor. 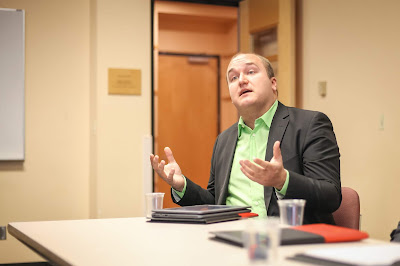 Firstly, he excelled in his role as teacher. He gave examples. He asked questions, having me question my basic assumptions and gifting the tools to achieve what I sought to achieve. It was one part lecture, another part conversation, and when he didn't know the answer he'd give direction on how to find the answer.

Secondly, he made himself available. Be it through coursework, relevant examples to my interests, and by virtue of being just being present, he provided both a time and a place to learn more from him.

And thirdly: he took me as I was. To be honest, and looking back with a critical eye, I probably wasn't the best fit. But he allowed for me to take this opportunity. And I took it.

On my political blog, for example, I grabbed hold of the lessons and asked him for advice. And in taking his guidance I was able to take my writing to the next level, leading to national winning blogging award after national blogging award. I took his advice and applied it to winning two elections at the student level and then proceeding to send three people into elected office in municipal and federal levels. I was part of a team that out-fundraised 99% of candidates and campaigns compared to the entire country.

A second professor-mentor was a retiring dean who went on to run for federal office. I had already been involved in the local organizing team before he threw his hat in the ring and met him through his nomination and ultimate candidacy. I managed his social media effort for his campaign, which then lead into writing a paper with him at an academic conference about social media and public intellectuals in the political discourse, and I went on to take as many courses I could with him after that campaign.

All told, I think I took four courses with him as the lecturer. Beyond course materials, I was given opportunities I wouldn't have had otherwise by working alongside him and under his tutelage.

And it was a two-way relationship. Through helping him I learned so much. And it was a continual, sustained effort on both our parts. This was one of the powerful things I learned: that having a mentor was one of mutual exchange and where each half built the other.

All of this effort, through both of the above mentors, lead to my third mentor who was able to teach me something that was needed at a point in my life that I truly needed it.

She sent me home with a bar of soap and told me to come back after I showered.

I grew up in very trying circumstances and she saw beyond those circumstances, and brought me up to the level that I’m at today. Without her, I am nothing. Mentors have been transformative for me. They make a difference.

And she found me at an event at the University of Calgary. At the time I was president of the University of Calgary Liberals, the largest progressive club on campus, and I was running an event inviting folks into the club at the end of a very successful clubs week. She was there and watched me work, and ultimately came over and asked if I had ever managed a campaign.

I said no, I hadn't ever run a campaign. But I wanted to learn. And she brought me on her campaign as her campaign manager. As campaign manager I lead her team of 75+ volunteers and fundraised ten times more than the typical school board trustee candidate. Through database management -- building it from the ground up -- and her discipline Judy Hehr won her position with 67% of the vote.

It was a campaign that no one had seen before in municipal politics. As just one example, she had more lawn signs in some neighbourhoods than the competing councillor and mayoral candidates: combined. It got to such a point that other campaigns were specifically looking for lawns with her signage and talking up her and her son to get the resident's vote.

That was a good sign. And there were many.

After this campaign a position opened up in her son's office - he was serving as the Member of Legislative Assembly for Calgary-Buffalo at the time - and she highlighted me as a possible candidate. One interview later I had the gig, working with him and began my journey that took me to Ottawa, South Korea, and meeting so many people from across Canada.

Was this networking? Maybe. The tried and true advice of many university and career counselors is to network to that first job and that first opportunity. It can sometimes be considered trite and repeatedly often enough to appear flimsy advice. But on closer inspection on my efforts, and where it lead, I can say that maintaining and building relationships with others was key for getting in the door.

Each of the above three examples were mentors, or at least mentor-adjacent, and each had an incredible impact my career and the person that I am today.

I had this realization about mentorship early in my career - about a year into working with Kent Hehr. And it stuck with me, and made me very focused on his internship program, and every internship program that I was lead on since. In total, I managed intern projects and hiring of interns for two Ministers and a Member of Parliament, over multiple cycles of hiring over the past five years.

It wasn't just about hiring them and getting them to stuff envelopes.

This was important. Their internship was important. It was important to attune yourself to the candidate and important to be able to tap into the abilities of that person entering the world of work. And I gave this advice to the students:
This matters for political offices. But I have a strong suspicion it is very similar to areas of non-profits and the private sector.

The first thing I would look at in a resume wasn't their degree path or their home city. It was how they were involved and how they showcased their involvement.

The turning point in my career and life was volunteering, building my skills, and getting good people into positions of authority. I wrote an award-winning blog for a decade: and while it got my name out it did not build relationships, move my policy options forward, and did not get people elected. (You can read my advice on blogging here.)

It's the same in the resumes of the students I hired. Where they're involved matters: and the choices they make to spend their time and show their value system.

I ended my remarks by telling the students to get involved, find their mentors, and to follow their passions.

It was also to be ready to be surprised. One of my best mentors I didn’t think of her as such until she brought it up. Sometimes it’s a good boss. Other times it’s a good friend. One of my mentors for me is someone who was on the opposite end of the political spectrum of me but gave me a chance.

The sources for mentorship could surprise you. And it's well-worth it to be open to it changing your life too.